by Mae and Ashley

Dia Dos in de Dota was a blast! We met the kids from San Rafael school and a bombardment of questions and answers flew from both sides. The local children had loads of practice in the confusing and complex English language. However, one kindergartner, Julie, took us by surprise being almost fluent! She translated between some of the kids and us switching between her perfect Spanish and outstanding English. 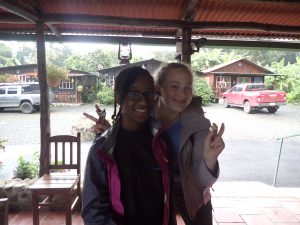 During lunch, we met our homestay families who were nothing but welcoming and kind. They made us traditional Costa Rican lunch of rice, beans, and chicken, which was delicious. After that, we played different card games such as UNO, 21, and War. These were easy to play even with the different cultures and languages because numbers are a universal language. It was great to see the houses because most of them include a covered patio, so they can be outside, even when it rains! 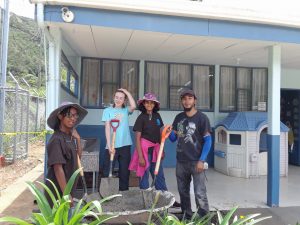 Getting our hands dirty (and our pants) was an amazing experience and quite a lot of fun, surprisingly.  We mixed, placed, spread, and flattened moist cement. At first, it may seem like back-breaking work but after doing it for a few minutes, we found the task to be quite entertaining and satisfying. We mixed gravel, dirt, dry cement, and water to form a liquid concrete.  The hardest part of the entire process was making the concoction, because it was basically rock and water, two very heavy masses. We then put this on the ground and smoothed to create a ramp. We cannot wait for tomorrow, when we will see the dry, finished product of barely a foot of concrete. 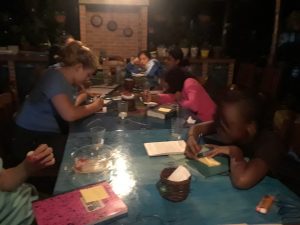 Later, we headed out to town to explore and participate in the commerce and culture of Santa Maria de Dota.  We bought bread for tomorrow’s homestays, which is tradition in Costa Rica. We also visited the park, church, and many shops and historical monuments. We even exchanged American dollars for Costa Rican colones.  We had to use our Spanish skills, and, for the Latin and French students, Spanish-English dictionaries. This was all underneath the branch of the organized scavenger hunt that sent us to different parts of town and prompted us to talk to friendly locals. We also saw the most adorable dogs, but with self control, we kept ourselves from petting them.

One thought on “Dia Dos in de Dota”